At a lunar eclipse thy shadow, Earth,
from Pole to Central Sea,
Now steals along upon the Moon’s meek shine
In even monochrome and curving line
Of imperturbable serenity…
Thomas Hardy (1840-1928)

We were determined to catch the October early morning Lunar Eclipse.  Before going to bed Mr. Garner had set the coffee to brew early (gotta love a programmable coffee pot!), so in the morning we just needed to heat milk for hot cocoa for The Daughter.  Early morning found us sluggishly stumbling to the kitchen, then out to the yard.  Bundled in blankets, and wakened by the chill, we snuggled into our chairs warming cold fingers on steaming mugs and watched as earth slowly slid between the hidden sun and the bright and glorious Hunter’s Moon.  For the moments that Sun, Earth and Moon aligned we observed the “sun-cast symmetry” as the moon’s face darkened, then turned ruddy in our shadow.

It seemed slow, but the wonder is that we don’t fly to the moon, and play among the stars, when we think about what is really happening.  Terra firma is in reality, more like terra turba, first spinning at the rate of approximately 827 mph (at our latitude) then hurtling around the sun at 66,660 miles per hour.  Our arm of the galaxy is also spinning around its center at 490,000 miles per hour. It’s a lot for a bleary brain to ponder at 5:30 am.  But watching the movement of these astronomical objects invokes a wonder that sings to the most somnolent soul in a way that doesn’t require trigonometry.

Mr. Garner took a few pictures (with the real camera).

The sun rose a little after 7 am and even before that the light of the greater star was overpowering the moon’s faint glow.  So, we called it “good!” and went to O’s Donuts in Ghent and picked up hot, fresh to order doughnuts for breakfast! 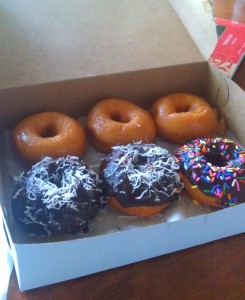 The Heavens declare the glory of God, the skies proclaim the works of His hands.  Day after day, they pour forth speech and night after night they display knowledge.  Psalm 19:1-2

Wake Up to a Total Lunar Eclipse

The Splendor of God’s Creation

Here is the whole text to the Thomas Hardy poem.  Hardy’s secular humanism, despite the declaration of heaven, can leave the reader feeling a little disappointed and hopeless, until we remember the omnipotence of God and His incarnation.

At a Lunar Eclipse

Thy shadow, Earth, from Pole to Central Sea,
Now steals along upon the Moon’s meek shine
In even monochrome and curving line
Of imperturbable serenity.

How shall I link such sun-cast symmetry
With the torn troubled form I know as thine,
That profile, placid as a brow divine,
With continents of moil and misery?

And can immense Mortality but throw
So small a shade, and Heaven’s high human scheme
Be hemmed within the coasts yon arc implies?

Is such the stellar gauge of earthly show,
Nation at war with nation, brains that teem,
Heroes, and women fairer than the skies?

One thought on “Sun-cast symmetry” 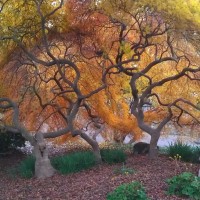 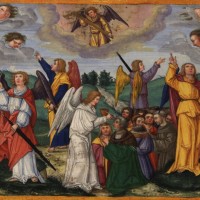