January started off interesting because The Daughter and I started “back to class”  on Monday the 6th, but the #1 Son was still on vacation from GMU through the beginning of our second week.  He would sleep late, and then wake up in time to provide more attractive alternatives (Minecraft, and brunch trips to Subway) to our generally quiet afternoons of reading and practicing piano!

We put #1 Son on the train with limited luggage mid-month so he could get back a few days early for Ultimate Practice.   The plan was to drive up on the weekend to bring his keyboard, the lion’s share of his *clean* laundry and whatever else he forgot.  This was fortunate because we got a call the next day that he had sprained his ankle.  So our Saturday visit included a trip to the local emergency care center, where thankfully the x-ray showed no breaks!

January required an update to our 2013-2014 School Schedule.  Initially we were set to start our Second Term in December.  That proved a bit ambitious.  We did less school Thanksgiving Week than I expected, resulting in a few days catching up on reading assignments.  By early December The Daughter and I were both yearning in true Advent fashion for Christmas Music and Christmas Classics.  (Next year, I’ll go back to having a three week Christmas Term.)  So, I needed to shift the schedule a few weeks, and re-evaluate Spring breaks and our testing week.  For this sort of bird’s-eye-view planning, I find the Free Printable School Year Calendar that Joy offers for free at www.fivejs.com very convenient and easy to use.  The year is all on one page, and if you use colored pencils or highlighters you can easily see where you are with a glance.  Very handy! Thanks Joy!

With our second term we continue our study of British History with Churchill’s book Birth of Britain.  The Daughter has hit her stride with this book, and her written narrations are coming along nicely.  William has conquered; Henry has dreadfully misspoken and Thomas A Becket is martyred. We are this week reading about the establishment of English Common Law, which is rather interesting given current events.

We also began reading G.K. Chesterton’s epic poem Ballad of the White Horse.  This is not an Ambleside Online choice,  but a schedule enrichment from Higher Up and Further In/Charlotte Mason Help.  We looked up the Uffington White Horse online, and began to understand the idea of “scouring” the horse which sounded like a PETA event waiting to happen, until I realized what it was.  The recent unearthing of Alfred the Great’s hip bone was a fun coincidence!  Churchill covers Alfred the Great in Chapter 7 of Birth of Britain, which was last term, so reading the Ballad this term is serving to keep Alfred fresh, so to speak.   Other new books for this term are A.W. Tozer’s Pursuit of God, Mark Twain’s Joan of Arc, and G.A. Henty’s In Freedom’s Cause, and Anne Malcolmson’s A Taste of Chaucer: Selections from The Canterbury Tales.

Our Charlotte’s Way Thursday group started back up after our December break, and then stuttered, due to snow of all things!  We follow the AO Artist/Composer/Shakespeare Term Rotation and add in Nature Study, poetry, a hymn, a folk song and a handcraft of some sort.  For two weeks instead of culture, we had snow and The Daughter made the most of it!

Rolling up the snow… 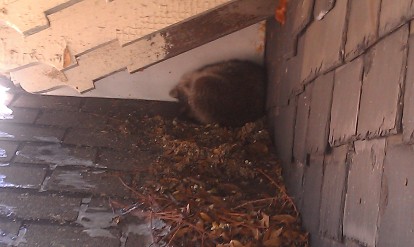 A racoon took shelter on our roof during the cold snap.

Snowman #1 is waving to…

Our Shakespeare play is Macbeth and the girls made it through the first few scenes of Act 1.  The play kicks off with the infamous witches and we had an interesting conversation about twisted meanings, and implied promises.  In his book, Brightest Heaven of Invention, Peter Leithart comments about Shakespeare’s use of equivocal language as an important theme of Macbeth, “The witches use words demonically, changing and shifting meanings, saying one thing but meaning another, reversing, twisting and tangling the meanings of words.  “The devil is a liar,” Jesus said; more than that, the devil lies by saying things that sound true.  Satan twists words to make them sound good, but what he says is a lie. ”  Again, current events spring to mind.

For our memorization efforts, we are still polishing off Isaiah 40.  The Daughter is doing much better than I am, as usual.  For something fun we’ve added the rollicking tavern song from Fellowship of the Ring, There Is An Inn, which Frodo sings to the taproom crowd in the Prancing Pony just prior to meeting Strider (in the first book of J.R.R. Tolkien’s trilogy Lord of the Rings).  A few stanza’s also make an appearance in The Hobbit: An Unexpected Journey although sung (not especially well) by the dwarves as they trash a Rivendell State Dinner.  I much prefer Tolkien’s setting.   The text, by Bilbo Baggins, is a humorous embellishment of the Nursery Rhyme  Hey Diddle Diddle.  Here is a recording of The Tolkien Ensemble’s interpretation: 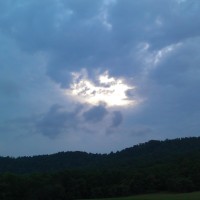