Some of these photos were part of larger photo collections I wanted to share in December, but didn’t get to it.  Some of our December went un-photographed.  I know.  Hard to believe. A great deal of December I’ve covered in my 12 Days of Christmas posts.

We started a wonderful Advent series that used Handel’s Messiah and the Biblical passages for each movement.  It was prepared by Cindy at Ordo Amoris.  We chose to pull out our  Handel scores and read along, which was great fun for The Daughter.  I’m ashamed to say that despite decades of Garner choral singing, other than a hymn book, The Daughter hasn’t seen a four part vocal score so it gave us a chance to show her.  We sang along, and after a few times, so did she! All in all, a fun way to begin celebrating Christ’s arrival. 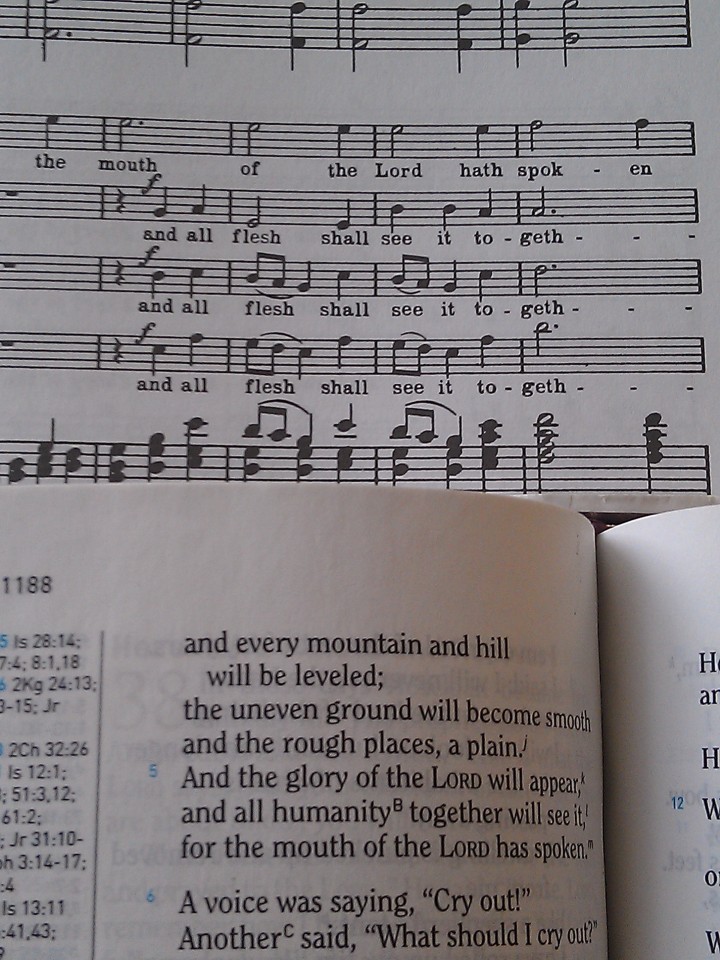 Of course, like previous  Advent Devotionals, we didn’t finish it, but we did get through the “Christmas” portion, so we plan to pick up where we left off and finish it during Lent.

The Very Reverend from Church of the Epiphany very thoughtfully dropped off an Advent Calendar to the daughter for old times sake! When I first started homeschooling, I was still working one day a week at Church of the Epiphany putting together their bulletins, newsletter and developing their website/blog.  The Daughter would bring her days assignments and hang out while I worked.  She has always loved coloring in the Morehouse Advent Calendar – she faithfully kept it up this year with no prompting from me! We even got a few of the items done! 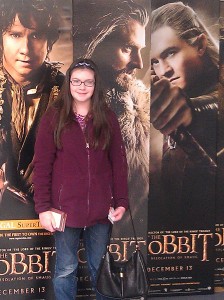 We went to see The Hobbit.  Of course.  But it didn’t end properly.  Just saying.

#1 Son was invited to an Appalachia Service Project workshop mid-month.  This was the next step of the summer project manager interview process so it was important to get him there.  After his car issues and our long drive taking him back after Thanksgiving, Mr. Garner drove up alone with an audio book, and then went to see The Hobbit (in High Film Rate 3D this time) while #1 Son was at the workshop, then drove back.  He said it wasn’t too bad since he had the long break in between driving.  He also bought me a few Christmas gifts while he was there, but I didn’t know that until Christmas!  #1 Son had a great experience at the workshop, so we are cautiously hopeful that he will be hired on.  Mr. Garner is already planning some more waterfall hiking!

Mid-December we took our turn hosting the stomach bug that was going around.  (No pictures, sorry)  Our entire family was afflicted, but there were benefits.  We saved on groceries.  No one wanted to eat for days.  Everyone lost a few unwanted pounds.   I caught up on the sleep that I’ve been missing with my “season of insomnia.”  Grace enjoyed watching a whole bunch of ditzy Christmas movies that normally I would not have permitted in the house.  On the flip side, I succumbed to curiosity and watched the first season of Downton Abbey – And I’m meaner now.  Seriously.

I blame NetFlix.  If one watches a show normally, there is a week to disengage, to evaluate if the show had any inherent value.  (I do like Foyle’s War, and Sherlock.)  However, when you watch Netflix or Amazon Prime, there only about 30 seconds of download time before the next episode starts.  Needless to say, each episode of Downton Abbey, in typical TV writing, ends on a bit of a cliff hanger.  I just had to watch one more episode to what was going to happen with Michael and Mary, and then Edith. There were moments when the stunning cruelty and startling contempt between the sisters actually stole my breath.  But it’s helpful to remember a staff of writers sitting around a table eating takeout wrote this rubbish, and I don’t have to watch it. Like many Americans I’m a sucker for a British accent. But O’Brien and the soap brought me to my senses.  Downton Abbey is nothing more than a very mean soap opera, in Masterpiece Theatre clothing.

The Daughter recovered from the bug first and soon enough to perform in the Talent Show at HSP.  She sang a jazzy arrangement of Winter Wonderland, accompanying herself on the piano, followed by a memorized performance of Pachelbel’s Canon.  I have no pictures because I forgot my phone.  She was wonderful! 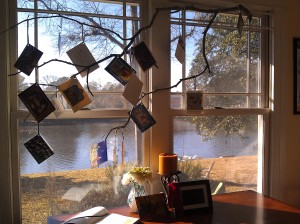 This was our second Advent and Christmas “just attending” the church we are visiting.  We used to always wonder “How can people do that?  Just show up for Sunday service and not come to anything else?”  Now we know!  We have always been very heavily involved in church so in one way it’s a little lonely, in another way we sighed in relief as we read facebook posts from friends dealing with overactive Advents.   So, what our December “church life” lacked in Christian warmth and community it made up for in lack of calendar stress.

Papa Gene, The Daughter and I squeezed in a trip to the Garden of Lights at the Norfolk Botanical Gardens just before New Year’s.  It was fun to be together and see the lights, but I was disappointed to see that the lights were still mainly flowers and trees and lovely effects, but there was no nativity.  Nothing to celebrate the Creator of light, or flowers, or gardens for that matter.  Still the cars were lined up for half a mile as we were leaving. 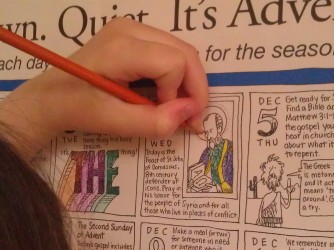 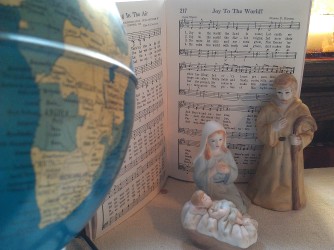 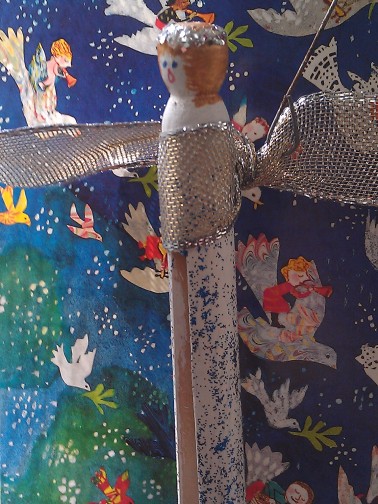 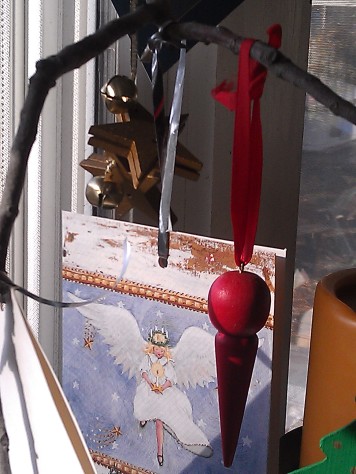 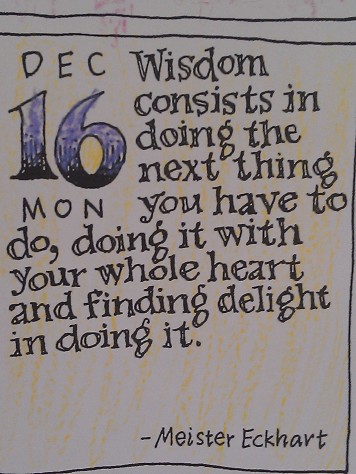 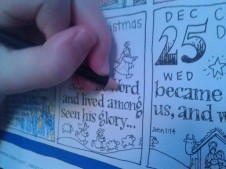 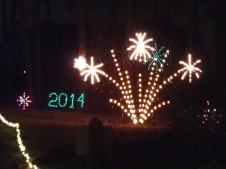 I’ve decided to spend some time this year writing about Christmas, and I’m tagging these posts the 12 Days of Christmas. G.K. Chesterton had a bit of a rant about the way we treat the celebration of Christmas. I’ve put the whole quote in my sidebar over to your right. Here’s a small clip that inspired me to share at least a few things about our Christmas:

“But one of the queerest things about our own topsy-turvy time is that we all hear such a vast amount about Christmas just before it comes, and suddenly hear nothing at all about it afterwards…Everybody writes about what a glorious Christmas we are going to have. Nobody, or next to nobody, ever writes about the Christmas we have just had”   G.K. Chesterton 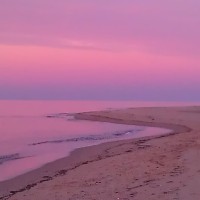 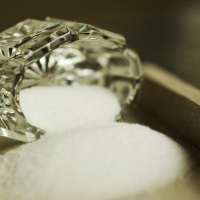