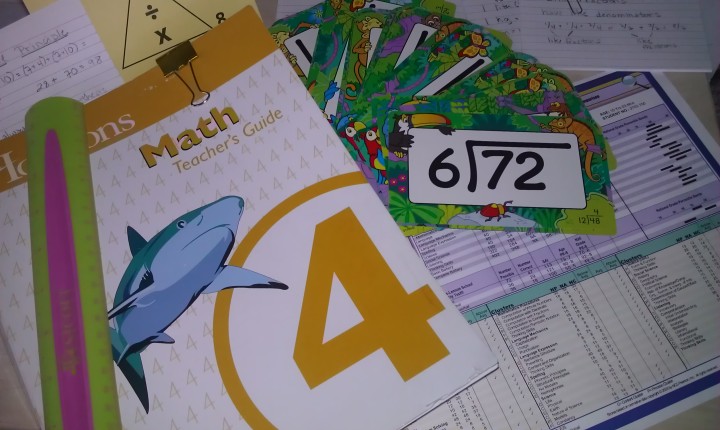 Probably one of the most worrisome aspects of homeschooling for me this past year was knowing that standardized testing loomed ahead in the Spring.   Homeschooling parents in Virginia must show evidence of academic achievement, and a nationally normed test is the easiest, least subjective way to do that. For me, it was to be a true test of the success of our Garner Homeschool Venture.  Many experienced teachers and homeschoolers caution that testing is not a complete indication of a child’s ability, and I agree.  However, plummeting test scores in the third grade at our former Lutheran private school featured high on my list of motivations for bringing Grace home for schooling.

Most troubling was the math computation score.  Math is completely foundational.  This problem had to be solved, and soon.  So we moved back on the number line, remediating third grade math in June of 2010.  This was more than a little humbling for Grace.  She had just finished a very rough and unpleasant third grade year, and here we were back at (home)school, and doing math!

We used Horizon Math from Alpha Omega, based on a review by Cathy Duffy.  The lessons are colorful, with multiplication, addition and subtraction drills disguised as flowers, puzzles, word problems and such instead of rows and rows of problems to work.  The concepts are presented in a spiral manner, meaning that they never really go away.  Fractions, geometry, Roman numerals, forms of measurement crop up regularly providing consistent reminders and a great deal of variety for the student.

A placement test provided by Horizon confirmed that third grade was where we needed to start.  Grace worked solidly through last summer and fall, graduating to Horizon’s fourth grade math in January of our fourth grade year.  Whew!  Now we were on “grade level!” Grace was primarily glad to have a book with a big 4 on it instead of that 3!

So far so good, but a look at the calendar reminded us that our achievement test in May would be covering a full year’s worth of instruction.  Grace pushed valiantly through the several weeks of review typical at the start of a new level of curriculum.  She sometimes finished two lessons a day, and with my permission occasionally skipped mastered concepts, and finally in early March, was sharpening her pencil on long division and fractions with impressive dedication.

A few weeks before the scheduled test week, we worked through the test preparation booklets and were fairly comfortable.  During the week of testing we emphasized a good night’s sleep, and a big breakfast each morning.  In our morning prayers, we made a point to thank God for the gift of math!  And at the urging of the Testing Administrator, Ms. Moore, I pretty much cancelled school that week.  Then we settled in to wait for the test results…

Imagine our delight to receive test scores this past week that validate Grace’s tremendous effort!  At the end of last year, her testing indicated she was in the 18th percentile in Mathematical Procedures in the National Percentile Rank-Stanine for third grade.  This year, using the same testing company, Stanford Achievement, she scored in the 92nd percentile in Mathematical Procedures for fourth grade!  She also moved from average to above average in Total Reading, Social Science, and Listening and maintained the previous year’s above average scores in Language and Spelling, putting her above average overall in every category.

As the homeschooling mom, what can I say?  I’m relieved!  I’m extremely proud of Grace for her persistence and dedication with relatively little complaining.  Most of all, I’m thankful to God for His guidance and His provision through this past year allowing me this wonderful opportunity to spend time with my daughter –  to teach her, to learn along with her, and to learn from her!

7 thoughts on “Divide and Conquer!”