I had to chuckle when I saw this fun blog post by one of my favorite home school bloggers, Heather, over at  Blog, She Wrote: More Game Storage.  I can really relate to her need for added storage!  Mr. Garner loves games.  Card games, board games, you name it.  We have games stored in the den coat closet, in all the upper shelves in his office, and on his floor, and on his card table…

Me?  Games?  Whatever.  My memories of games involve getting creamed at chess, within a few moves, by older brother, looong never-ending-games of Monopoly at my grandparent’s house, and boy cousins who would not include me in their games of Risk.  Scrabble is okay.  I like Mhing (a card version of Mah Jong).  When I was in college, everyone played backgammon so I have a bored or two, (misspelling is intentional).  I used to be pretty good at poker, because I have a good poker face, but alas, I don’t have the funds…

and beautiful figures and pieces.  Games that you have to “set up.”  Complicated games that take hours to play.  He enjoys reading…the rules.

I can’t complain.  Mr. Garner has been very supportive of homeschooling.  Especially since each period of history has a game to go with it!  He has Ark of the Covenant, Journeys of Paul, Hannibal – Rome vs Carthage;  Settlers of Catan, Roll through the Ages, Thebes, Beowulf, Condotierre, Yspahan (set in Persia), Serenissima, El Grande, Dominion, San Juan, Puerto Rico,  Age of Empires, Wilderness War, Liberty, Founding Fathers, Lewis and Clark.  Now that we are discussing the Civil War, He’s pulled out Battle Cry.  I could go on and on  –  because these are only the history games.

His most recent acquisition, Ticket to Ride, is in fact thanks to Heather.  He was ECSTATIC when I mentioned that Heather uses Ticket to  Ride in homeschooling.  He shared excitedly, that Ticket to Ride is a wonderful “gateway” game.  A gateway game is one that non-gaming wives, (I’m apparently not the only one), will actually enjoy when guilt requires that they finally play a game with the family.  Undaunted by our tighter than usual circumstances, he enrolled The Daughter in the Barnes and Noble Kids Club, and started watching for coupons. 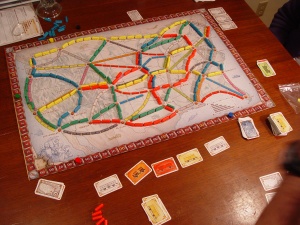 So, on our recent weekend at the farm, we all gathered around the table to play Ticket to Ride.  Gamer Husband was trying to outfox all involved.  Gamer Son figured out his strategy at the beginning and did not swerve.  Sort-of-Gamer Daughter just had lots of fun!  Non-Gamer Mom, this would be me, was assigned three routes of track to lay, all three of which were cross-country and required lots of cards to accomplish, and so she just kept her mouth shut, focused, and did it.  Isn’t that what you’re supposed to do?  Imagine EVERYONE’s surprise when Non-Gamer Mom won!  Gamer Son still can’t figure out what he did wrong…. 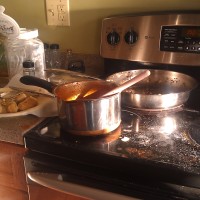 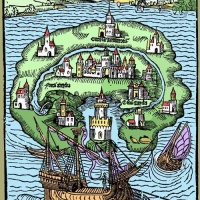